I recently wrote a blog about raising brave boys because the world needs a few good men in it. To raise those brave boys, it takes brave moms and dads. 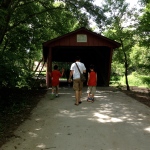 But the role of the father figure has been stomped on and mashed to pieces by society and the world. As a result, we have boys being raised by men who are afraid to be who they were truly created to be because everyone around them, including many women have stripped them bare and made them inadequate. Not every man has fallen prey but way too many have taken on this mind-set of failure. It has become a self-fulfilling prophecy.

We have dads portrayed as defuses and idiots on many major networks and in especially in kids’s programming. What is this teaching our kids, both boys and girls?

We have dads who bail on their families because they’ve bought into the message that they are stupid, have nothing to offer and aren’t needed anyway. If people already believe that, than why bother at all?

We have dads who fail to lead their families in spiritual matters. It’s moms who bring their kids to church the stats are telling us. Where are the men and why did they leave?

This is not a man bashing piece. On the contrary. As a mother of boys, it is important to me, that they learn to grow into strong, loving men, who are not afraid to be leaders. To lead their families, to lead in their jobs and in the world around them. To be the men they were created to be, not some feminized version that the world decided was necessary and right.

Some days it feels like a losing battle because men seem to be giving up ground here. The male beating that goes on in the media, in social settings and in conversations with women is seriously threatening our men, boys and future dads.

Moms, we need to look at how we speak to our husbands in front of our children and other people. Do we put them down, emasculate them, humiliate them? We’ve all done it. I’m guilty of it. We need to change our ways. As women, and wives, we need to respect our husbands but also believe in them. To put our trust and faith in them. To let them take the leadership reins. I believe that most men want to be good husbands and dads. They just need to be given the chance.

This is hard. I know. But as a mother of boys, I want them to see their Dad lead their family. I want them to see us (Mom and Dad) work together as partners, with respect and love for each other. I want them to witness their Dad being brave enough to listen to me and take in consideration my ideas, opinions, thoughts on important issues. But I also want them to see a strong woman who is brave enough to follow her husband. Sounds like an oxymoron. It isn’t. I believe it is the essence of a healthy marriage. (And you know I’m not talking about abusive relationships here.) This kind of healthy relationship mirrors our relationship with God. How as His sons and daughters, we have input but we need to trust and have faith that He knows what’s best for us. That we follow Him. We trust in His love. We let Him lead us.

I am so blessed and thankful that my boys have a great role model in their Dad. He has made time for them even though a whole congregation wants and needs his attention as well. He has sat and played on the floor with them, first with trains and then lego and board games.

When I have stepped back and rescinded control, my husband has more than stepped up to the plate. He does so many fatherly things well. Maybe as moms, we need to do this more often. Set our husbands up for success rather than failure.

This world needs to see men who are brave enough to step out and smash the demeaning image of men and dads that is so wrongly portrayed today. Who are brave enough to embody who a man really is and then go out and live it. So our boys can follow them and become the men God created them to be.

I’m on the lookout for a few good role models. What about you?

PrevPreviousDavid: Portrait of a Son
NextBRAVE: Why I Don’t Have To Be Wonder WomanNext